The Aim of the Game

Ultimate is a non-contact, self-refereed team sport played with a flying disc (or Frisbee™).

Two teams of seven players compete on a playing field about the same length as a football field, but narrower.  At each end of the playing field, there is an end zone.  Each team defends one endzone. They score a goal if one of their players catches the disc in the opposite end zone.

The player with the disc is called the thrower. The thrower may not run with the disc.  Instead, they move the disc by passing to team-mates in any direction. 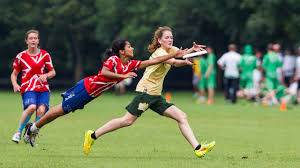